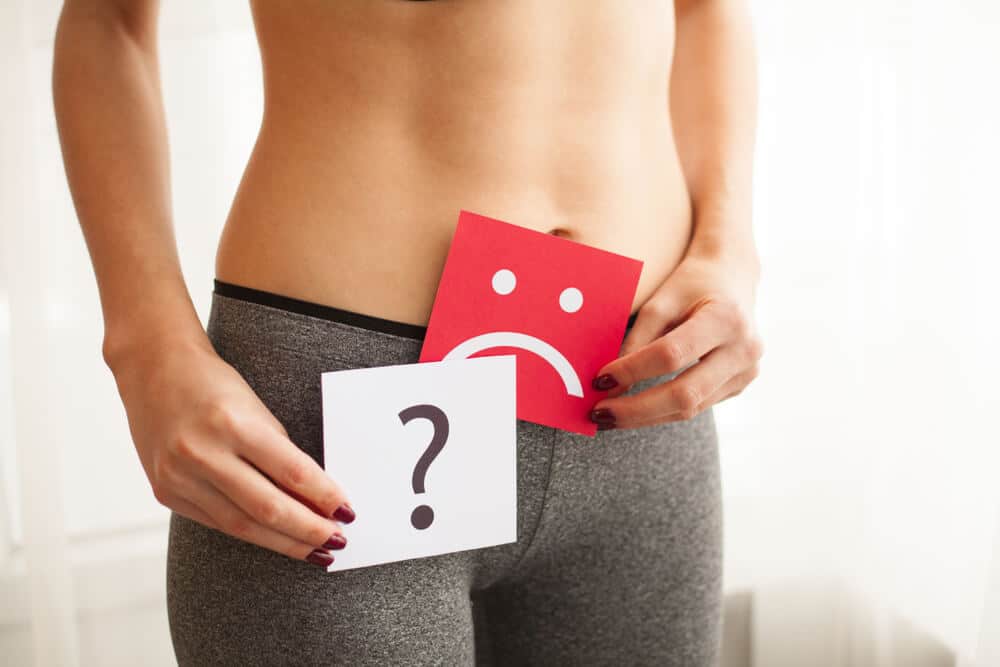 Vaginal discharge can be an uncomfortable topic for people to talk about. Like any health topic, though, it is important to know the basics so that you can better understand your body… and seek help if something is wrong.

What is Considered “Abnormal” Discharge?

Vaginal discharge is a completely normal part of life. The vagina naturally produces secretions that exit the body in the form of a discharge. This discharge can be thin or thick, clear or white, and have a mild, non-offensive odor.

However, infections, medications, and illnesses can change this discharge. These changes from what is your normal are what make discharge abnormal.

Abnormal discharge isn’t very dangerous in and of itself. While it can cause secondary infection or infect other people—especially in the case of sexually transmitted diseases (STDs)—the discharge itself is harmless.

Let’s take a look at several common causes of abnormal discharge, their symptoms, and what you can expect from them…

Who is at Risk?

While chlamydia most commonly affects cisgender women, it can infect anyone. Chlamydia can infect the vagina, rectum, or throat. Because many people with chlamydia do not experience symptoms, it can spread quickly and be hard to detect.

Infected individuals are treated with antibiotics. Their sexual partners are also treated to prevent the disease from spreading. Experts recommend frequent STD screenings to help prevent the spread of this illness.

Chlamydia is a bacterial infection; Chlamydia trachomatis infect the body and will compete with the natural balance of bacteria already present the vagina. While the infection is ongoing, chlamydia changes the normal balance of vaginal bacteria, which can change vaginal discharge.

Additionally, chlamydia, like many other infections, causes an increased production of pus and white blood cells in the infected areas. This intermixes with discharge and changes its characteristics, too.

The abnormal discharge caused by chlamydia often takes on a yellowish color due to the increased presence of pus and white blood cells. This discharge can also be thicker than usual and in an increased amount.

Other Symptoms of Chlamydia

Other symptoms of this disease can include:

Additionally, an infected person might notice that their eyes are experiencing pain and a discharge as well.

Gonorrhea (“the clap”) is a sexually transmitted bacterial infection. In fact, it is one of the most common STIs, along with chlamydia. Also like chlamydia, people with this STI can be asymptomatic. That is, they show no symptoms. In fact, infected individuals can go a long time without showing symptoms, which leads to spreading the infection.

If this symptom is present, gonorrhea will cause the discharge to take on a greenish color. This green can be anywhere from a light green that looks mostly off-white to a deep green. In rare cases, this discharge will also have a foul odor.

Other Symptoms of Gonorrhea

In some cases gonorrhea has no symptoms. Other times, though, it can cause symptoms like:

Millions of people take a hormonal birth control pill at some point in their lives. In fact, it is one of the most common forms of contraception used today. When taking the pill, people can expect their vaginal discharge to change. However, unlike other entries on this list, these changes are not necessarily a sign of something serious.

Over time, vaginal discharge will normally change. After all, hormones change over time and these hormones regulate the production of vaginal secretions. Therefore, it comes as no surprise that discharge changes along with these hormones.

Birth control pills contain the synthetic hormones estrogen and progestin (progesterone), which act like estrogen in the body. By changing the natural level of estrogen, the nature of vaginal discharge also changes.

Discharge production may increase or decrease and take on a new odor, but it will still be relatively “normal.” If there are any unusual colors or foul odors, see a doctor.

The human body contains countless harmless bacteria. Some, like digestive bacteria, are even beneficial. The vagina is no exception. However, if these bacteria overgrow or become unbalanced, vaginal discharge can change.

Normal discharge production is partly regulated by the pH balance and bacteria that harmlessly reside in the vagina. However, if these bacteria become overgrown or the balance changes, the vaginal discharge will change as well.

The most typical changes are changes to odor. Sometimes, the color and texture of the discharge can also change.

Other Symptoms of Bacterial Vaginosis

In some cases there are no symptoms at all. However, itching and a noticeable odor are two of the most notable symptoms.

This entry might seem like an odd cause of abnormal vaginal discharge. However odd it seems, soaps and bubble baths can irritate the vulva and lead to unpleasant discharge.

Why Soaps and Bubble Bath Cause Abnormal Discharge

There are three underlying factors to consider here.

All of these factors can lead to abnormal discharge.

Never use a bubble bath to treat the cause of abnormal discharge.

Many people believe that douching is necessary to clean the vagina. Nothing could be further from the truth! The vagina is a self-cleaning organ.

Why Douches Cause Abnormal Discharge

Douching can disrupt the normal pH balance of the vagina. This disruption changes the nature of normal discharge with often unpleasant results.

Depending on the individual, this discharge can vary widely. Most common changes are thicker or thinner discharge; a change of color that is usually from clear or white to shades of yellow, green, and brown; and the appearance of a strong and unpleasant odor.

Pelvic inflammatory disease is not a sexually transmitted disease in itself, but STIs can cause it. Furthermore, those who regularly douche are at a greater risk of this disease.

Pelvic inflammatory disease can the result of a variety of underlying infections. This disease occurs when an infection moves from the vagina and into the womb. Most often, this infection is an STI. By moving deeper into the body, PID causes considerable changes in discharge production.

If an individual is suffering from PID, their discharge will change considerably. Discharge production will become much heavier and will take on a noticeably foul odor.

Other Symptoms of Pelvic Inflammatory Disease

Trichomoniasis (“trich,” which sounds like “trick”) is a sexually transmitted disease caused by a parasite. While infected cisgender men tend to be asymptomatic, cisgender women can experience a variety of symptoms.

Despite the fact that many people don’t know what trich is, it’s one of the most common sexually transmitted diseases in the United States.

The parasitic infection is the cause of this abnormal discharge. By disturbing the vaginal tissue as well as changing its natural condition, trichomoniasis alters the normal process of discharge production.

Trichomoniasis has a variety of effects on discharge. It can cause the discharge to be either thinner or thicker than usual. It’s most pronounced change comes from the greenish-yellow color the discharge takes on. In addition to these changes, there can also be a strong, fishy odor.

Other Symptoms of Trichomoniasis

Thankfully, trichomoniasis can usually be cured with a simple dose of antibiotics.

Menopause is a natural time in a cisgender woman’s life when the body stops producing as many reproductive hormones; it typically happens somewhere between the ages of 40 and 50. It is defined as being 12 months after the last menstruation.

Lower levels of estrogen lead to a thinning of the vaginal wall. This thinning, in turn, causes increased dryness and a higher change of irritation, inflammation, and other health problems. All of these factors can result in abnormal discharge.

Menopause can be the underlying cause of a variety of types of abnormal discharge. Because this condition causes so much change, it leads to many different types of discharge.

Other Symptoms of Menopause

The most well-known symptoms are:

Yeast infections are incredibly common; up to three out of four cisgender women will experience a yeast infection at some point in their lives.

Why Yeast Infections Cause Abnormal Discharge

Yeast infections are caused by the fungus Candida. This fungus ruins the natural balance of the vagina and causes agitation as well as swelling. This disruption leads to abnormal discharge.

Vaginal discharge from a yeast infection is very distinct. It appears thick and white with a texture that can be described as chunky or curdled. Many have commented that it is like cottage cheese. This type of discharge is odorless or only slightly different from your usual odor.

Other Symptoms of Yeast Infection

If you notice any changes in your normal vaginal discharge, it’s best to get in touch with your doctor right away. While it might be nothing more than irritation caused by soap, changes from birth control, or a natural part of aging, it could also signal health problems and infections.