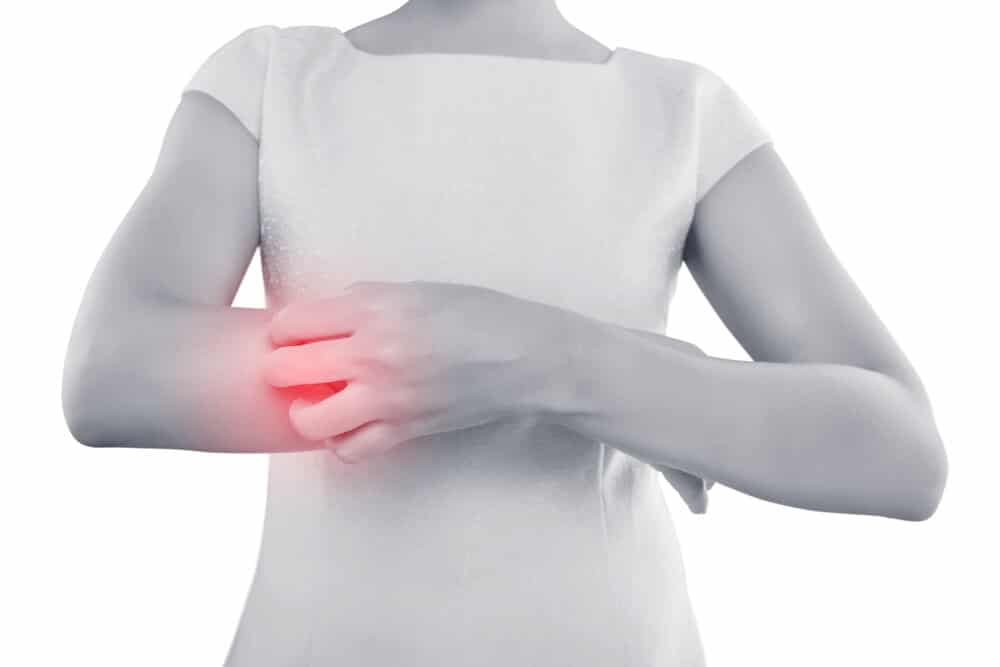 Atopic dermatitis (AD) is the single-most common form of eczema. According to the National Eczema Association, roughly 10% of the population in the United States lives with some form of eczema. In other words, about 1 in 10 people in this country live with this condition.

Could you or someone you love be one of them?

What are the symptoms of atopic dermatitis?

AD, like other forms of eczema, can come in stages with varying degrees of severity. However, what is typically common are the following symptoms:

These symptoms can appear anywhere on the body. However, common locations are on the arms or the knees (behind the knees, specifically).

Unfortunately, there is currently no cure for this condition. There are, however, plenty of treatment options that can not only reduce the severity of symptoms, but also reduce the number of breakouts someone experiences. Which treatment works best depends on the individual patient.

Popular treatment and management methods include the following.

Steroids are common treatment options for those struggling with skin conditions like eczema. However, steroids will not work well for everyone. In such cases, prescription options like Eucrisa (crisaborole) may help. Eucrisa is a non-steroidal treatment option that may provide sufferers of atopic dermatitis the relief they crave.

Antihistamines are a class of medications that are commonly known as allergy medications; they work by blocking the action of histamine, a chemical that the body releases in response to injury or allergens. Common side effects of histamine release include itching, swelling, and redness at localized points on the body.

Experts are not 100% sure of how antihistamines combat eczema symptoms. That being said, they believe that, by blocking the action of histamine, antihistamines can consequently relieve side effects of this compound, like itching.

Moisturizers will not speed up the rate at which a flare-up heals. They will, however, alleviate symptoms of a flare-up like dryness. When choosing moisturizers for this condition, it’s important to choose ones that are less irritating on the skin. So, dye-free and fragrance-free options are best. Believe it or not, the National Eczema Association states that greasy-feeling moisturizers are best to use for relieving symptoms of eczema.

The best time to apply? Right after showering or bathing. This way, you can lock in moisture ASAP.

Popular moisturizers that have received the National Eczema Association Seal of Acceptance™ include:

Steroids are synthetic (human-made) versions of naturally occurring hormones that perform several important functions. One such side effect of steroids? Typically, a reduction of inflammation and redness, when used for eczema relief. The most common steroids people use for eczema relief are known as corticosteroids.

Steroids are available both OTC and as prescriptions. Like moisturizers, applying a steroid immediately after a bath or shower provides the best results.

Popular steroids that have received the National Eczema Association Seal of Acceptance™ include:

Topical antiseptics are medications that can stop the growth of potentially harmful microorganisms that you apply on your skin. For people who experience infections from their atopic dermatitis, antiseptics may help, so long as the products they use are not so powerful that they cause irritation.

Popular antiseptic products for eczema include:

UV light therapy is often available at hospitals and specialized clinics. Constant trips can be costly, though, which is why many people invest in home systems so that they can reduce the cost of UV therapy.