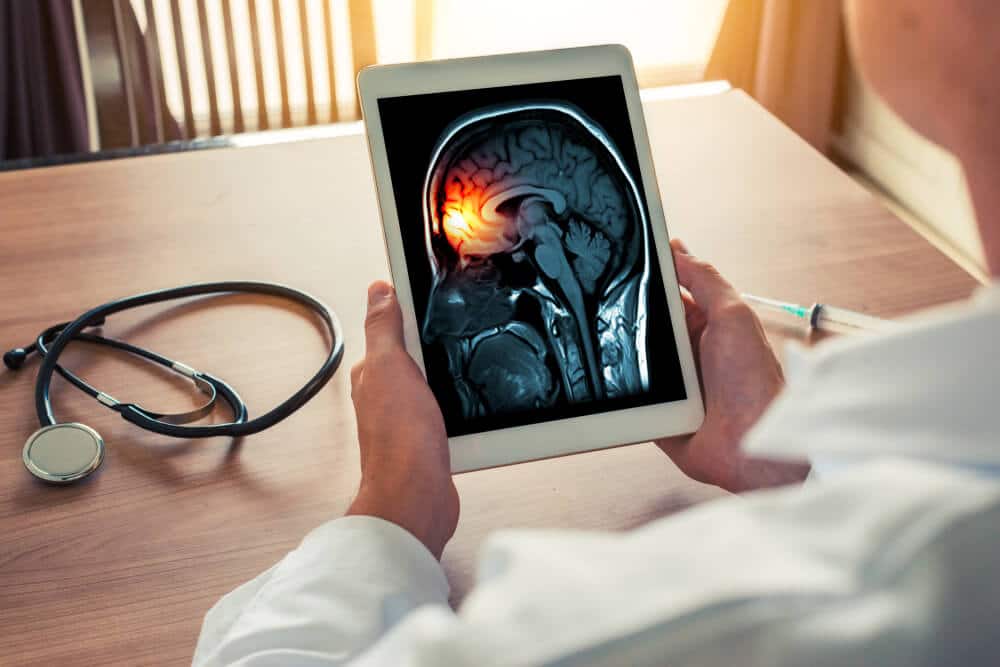 Every year, approximately 600 to 1,000 individuals in the United States contract meningitis. Unfortunately, 10 to 15 percent of these individuals die. One out of every five survivors is left with a permanent disability including brain damage, an amputated limb, loss of kidney function, and hearing loss. Approximately 21 percent of all cases of meningitis are diagnosed in young adults, teens, and preteens between the ages of 11 and 24.

One out of every five teens living in the United States has not been given the first dosage of the vaccination for meningitis. This dosage provides protection for serogroups A, C, Y, and W. These teenagers are still unprotected from this dangerous disease.

In order to properly treat meningitis, it’s important to understand what your symptoms are. The warning signs that you may have meningitis include:

Meningitis can be developed because of many different causes, which is why it’s all the more important to understand what can cause this disease to form.

Acute bacterial meningitis can result due to bacteria entering the bloodstream and traveling to the spinal cord and the brain. When there is a direct invasion of the meninges by the bacteria, meningitis can also result.

Why Bacteria Can Cause Meningitis

While bacteria can spread meningitis through the spinal cord and the brain, this next cause spreads through the throat and respiratory secretions.

Meningococcal bacteria are classified as a Gram-negative bacterium that can cause both meningitis and a potentially fatal disease called meningococcal sepsis.

Why Meningococcal Bacteria Can Cause Meningitis

The bacteria spread through the throat and respiratory secretions in ways such as spit through numerous activities including kissing and close contact with another person. Typically, the disease is treated by physicians with antibiotics.

This includes septicemia or bacteria or an infection of the bloodstream and meningitis or an infection of the spinal cord or brain lining. Septicemia and bacterial meningitis are most often caused by meningococcal bacteria. This is the most frequent type of bacterial meningitis in Ireland and the United Kingdom. The group with the highest risk are children below the age of five and babies. The disease can peak for the second time when the child becomes a teenager.

This next cause of meningitis occurs due to tiny infected droplets from the nose, throat, or mouth.

Pneumococcal bacteria is an inflammation and infection of the meninges. Meninges are membranes covering the brain and spinal cord.

Why Pneumococcal Bacteria Can Cause Meningitis

When the meninges are exposed to pneumococcal bacteria, it can cause meningitis. This is the first or second most common type of meningitis in numerous countries including the United States and the United Kingdom.

The disease is spread from person to person through the transmission of the bacteria. The spread occurs due to tiny infected droplets from the nose, throat, or mouth. Meningitis can be contracted by being too close to the sneeze or cough of an infected person.

While pneumococcal bacteria causes a more common type of meningitis, this next cause has bacteria that is extremely rare and fatal.

Streptococcus pneumoniae bacteria is a rare and extremely serious type of meningitis that can result in death or long-term consequences.

Why Streptococcus Pneumoniae Bacteria Can Cause Meningitis

Streptococcus pneumoniae bacteria infect the meninges causing the membranes to swell, resulting in pneumococcal meningitis. This is a rare and extremely serious type of meningitis. To minimize the risks of serious consequences, the disease must be treated quickly.

This is the leading cause of septicemia and meningitis in newborns. The disease can be transmitted to the baby from the mother both during and before birth or due to contact with any adult handling the baby.

Approximately 20 to 30 percent of all pregnant women have this bacteria in their vagina or bowels. Fortunately, even if the mother has this bacteria, there is a 99 percent chance the baby will be born healthy.

Due to the introduction of a vaccine, the instances of pneumococcal meningitis have significantly decreased. Meningitis can also be caused by Listeria bacterium.

Listeria is a gram-positive bacterium shaped like a rod capable of replicating and penetrating human cells.

Why Listeria Bacterium Can Cause Meningitis

Once the cells have been replicated, the result can be listeria meningitis. This illness is foodborne, resulting in serious symptoms including convulsions, high fever, and potential death.

The majority of healthy adults exposed to this bacterium experience either minor symptoms or no symptoms at all. The highest risk groups are the elderly, individuals with a compromised immune system, newborns, and pregnant women.

Listeria Meningitis can be transferred from the mother to the baby during either labor or pregnancy. The mother can be infected by consuming foods contaminated with listeria. For this reason, consuming specific foods while pregnant is not recommended. This includes specific types of cheese, unpasteurized milk, and pate. Salmonella bacteria can also cause meningitis.

Salmonella is a rare type of meningitis seen more frequently in the United States. This disease may result from keeping a lizard as a pet.

Why Salmonella Bacteria Can Cause Meningitis

Salmonella meningitis is a rare form of the disease transmitted to adults, babies, and pregnant women by reptiles. Once the bacteria are in the bloodstream, every organ and tissue become susceptible. Between 1975 and 1991, salmonella bacteria resulted in 0.9 percent of all bacterial meningitis cases in newborns. The percentage for all other ages was 0.2 percent.

The highest risk group is premature infants due to low birth weight and babies born after prolonged labor. In most instances, salmonella bacteria result in food poisoning. Salmonella meningitis is much rarer and predominantly seen in the United States. GAS bacteria can also cause meningitis.

The GAS bacterium is frequently found inside of the throat and on the surface of the skin. This bacteria can cause infections in both children and adults.

Why GAS Bacteria Can Cause Meningitis

When GAS bacteria penetrate deeply into the organs and tissues of the body, the result can be a serious disease such as meningitis. This bacteria can also cause a blood infection called septicemia, a childbirth infection called puerperal sepsis, and a lung infection known as pneumonia.

When GAS bacteria penetrate sterile areas of the body, the rapid multiplication produces poisons. If this poison penetrates deeply enough beneath the skin, the result can be meningitis. Meningitis can also result from specific viruses.

When an individual is exposed to either Echovirus or Coxsackie groups of enteroviruses, it can lead to viral meningitis.

Why Viruses Can Cause Meningitis

There is a fairly wide range of viruses capable of causing viral meningitis. The majority of people receive exposure to at least a few of these viruses during their lifetime without viral meningitis developing. Most infections result in either mild symptoms or no symptoms at all.

Common symptoms include a cold or a sore throat. In some cases, diarrhea or an upset stomach may be a result. These viruses are generally transmitted by children, who are the most frequently affected. Enteroviral infections are the most common during the summer and fall. Viruses are usually spread by mouth.

Another common cause for adults and teens contracting viral meningitis is the herpes virus. Herpes viruses include the varicella-zoster virus responsible for both shingles and chickenpox and HSV or the herpes simplex viruses. HSVs can cause encephalitis in addition to meningitis. This causes a dangerous inflammation of the brain.

HSV-1 generally results in cold-sores. HSV-2 results in either genital herpes or viral meningitis. Different funguses can also cause meningitis.

Both candida and cryptococcus funguses can cause a dangerous type of meningitis called cryptococcal meningitis. Although rare, premature babies can contract fungal meningitis due to low birth weight.

Why Fungi Can Cause Meningitis

The most common cause of fungal meningitis is cryptococcus neoformans. The fungus comes from a fungus or yeast generally found in the soil and environment all over the world. Only individuals with an immune system deficiency such as cancer, HIV, or an inherited immune condition will develop a serious case of cryptococcal meningitis.

In rare instances, an individual with diabetes can develop this condition. The more severe symptoms include sudden hallucinations and a drastic change in mental state.

An antifungal medication such as fluconazole, flucytosine, or amphotericin B is required for treatment. In many cases, maintenance therapy is necessary. This means the individual will most likely need to take medication for the rest of their life. Meningitis can also develop due to Histoplasma.

Histoplasma is a harmless and common fungus for individuals with a functional immune system.

Why Histoplasma Can Cause Meningitis

Individuals with immuno-deficiencies or an invasive disease can contract meningitis. Between five and 10 percent of all people with disseminated histoplasmosis develop meningitis. Histoplasma can cause chronic meningitis, spinal cord or brain lesions, encephalitis, hydrocephalus, or stroke syndromes. This condition is treated using Amphotericin B.

If you are experiencing the symptoms of meningitis, you should seek medical attention immediately. Many of the treatments are not nearly as effective if you do not receive treatment quickly.

Depending on the specific type of meningitis, this disease can be extremely dangerous and result in death or long-term consequences. Individuals of every appropriate age should receive both the vaccines and boosters currently available for the prevention of numerous types of meningitis.