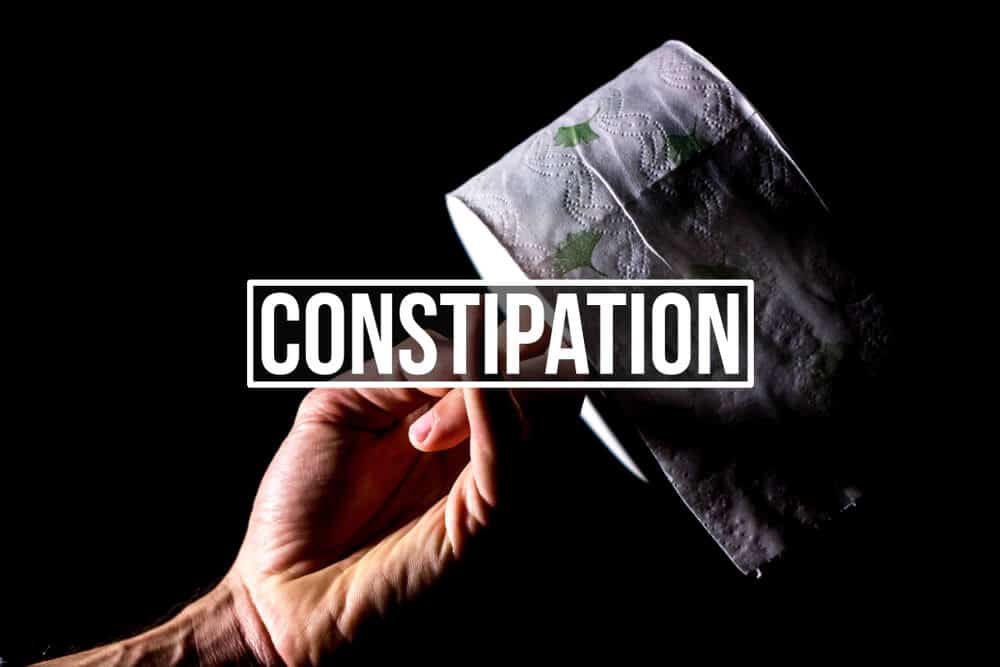 Generally defined as a difficulty or an inability to pass stool, constipation can range from being a mild annoyance to a serious health issue. So, just why exactly do people experience this crummy condition, anyway? And how can someone deal with the side effects of constipation?

Let’s break it all down.

Why does constipation happen?

Constipation is generally caused when stool moves too slowly through the intestinal tract, causing it to become hardened and lumpy. And hard lumpy stool is much more difficult to pass, meaning people often have to strain to excrete any waste with this condition.

What are the side effects of constipation?

While many of these symptoms and side effects may seem obvious and rather benign, some can cause more serious health concerns, which may include the following…

The feeling of having blockages in your intestinal tract is common when dealing with constipation.

What is this side effect?

There are a few actions you can take to alleviate the blockage issues on your own.

An impacted colon is the result of a problem in the digestive process, leaving waste stuck in the colon… which means other waste is blocked from exiting the body and backs up. In some cases, chronic constipation can lead to this very issue.

What are the symptoms of impacted colon?

Since the blockage to the colon can be rather deep in the abdomen, an impacted colon usually refers to a complete blockage of the digestive pathway. Therefore, it is best to seek medical treatment if you believe you have an impacted colon.

Your doctor can run a variety of tests, including:

General treatments for an impacted colon include:

What is colonic irrigation?

This process involves a small tube being run up the rectum and to the colon. From there, water is used to clear the blocked area. Then, the waste is sucked out through another tube, and any other remaining waste build-up is massaged out of the abdomen.

What are some ways to prevent recurrence of impacted colon?

People who have previously had an impacted colon are at higher risk of recurring issues. Drinking lots of water, reducing sugar intake, and eating foods high in fiber can act as preventative measures.

The following potential side effect of constipation? It’s a real pain in the behind…

Hemorrhoids refer to the inflammation and swelling of veins in or around the rectum and anus.

What are the symptoms of hemorrhoids?

These swollen veins generally cause:

Why do hemorrhoids happen?

While the exact cause of hemorrhoids isn’t entirely clear, it’s theorized that they may be the result of:

There are several potential remedies for constipation, including:

Hemorrhoids are largely uncomfortable potential side effects of constipation. The following, though, might appear more alarming to many people…

Rectal bleeding is an alarming sign. However, sometimes it might just be surface-level bleeding, which is typically not cause for major alarm. Other times, though, this symptom can indicate a more serious problem.

Any number of conditions may cause rectal bleeding. One way to better determine the location and potential cause of the bleeding? The appearance of the blood itself.

Even for small amounts of rectal bleeding, it is important to seek medical treatment. After all, bleeding can become more severe depending on the cause.

If you suffer from more severe symptoms, seek medical assistance immediately. These symptoms include:

The following side effect of constipation usually is mild, although in some cases it can result in severe complications…

How long do fissures take to heal?

What if they don’t heal?

These remedies may include:

Colon or bowel stricture is essentially the narrowing or constricting of the colon or bowels, which inhibits the proper movement of stool and waste through the intestinal tract.

There are a variety of conditions that may cause stricture (besides constipation).

What are the symptoms of bowel stricture?

Symptoms of bowel stricture generally include:

There are a few different treatments for bowel stricture, which will vary on what exactly the cause is.

What about preventative measures?

You can take preventative measures to avoid bowel stricture by:

Constipation and resulting hemorrhoids may cause the following concerning condition…

Rectal prolapse is generally caused by straining to expel fecal matter from the bowels; so, severe cases of constipation (or hemorrhoids resulting from constipation) may lead to rectal prolapse.

What is a rectal prolapse?

A prolapse is when a part of your body has slipped or fallen down from its normal positioning. In the case of rectal prolapse, the rectum slips out of alignment. Notably, rectal prolapse means the rectum can still be within the anus (but not where it should be) or partially or fully outside of the anus.

What are the symptoms of rectal prolapse?

If you’re suffering from rectal prolapse, it may be easy to spot visually if the prolapse is fully outside of the body. In cases with partially external or internal cases, though, you’ll have to look for other clues.

Some other signs of rectal prolapse include:

Prolapse can be the result of severe straining when having a bowel movement. Given the very nature of constipation, that makes rectal prolapse a possible side effect of severe chronic constipation.

Other potential causes of rectal prolapse include:

In minor cases, you or your doctor can try pushing the rectum back into place by hand. While it can be a temporary fix, surgery is the most common treatment to properly fix the issue. Now, there are several approaches a doctor may take when it comes to surgery.

The following side effect of constipation isn’t as severe as rectal prolapse, although it can still lead to some severe discomfort…

The pelvic floor muscles play a major role in controlling the body’s regular bowel movements. Normally, the muscles work on their own without much conscious thought. With pelvic floor dyssynergia, these muscles become uncoordinated, making bowel movements more difficult.

How is this condition diagnosed?

The condition is usually diagnosed through one of the following methods:

There are a wide variety of treatments for pelvic floor dyssynergia. These treatments include:

Some of the side effects of constipation are lesser-known; that cannot be said of the following…

Our bodies have a natural rhythm. Namely, they follow certain natural cycles and automatically perform certain functions without us even realizing it. One of these functions? Regular bowel movements.

While minor and intermittent constipation bouts aren’t too much to be concerned about, long-term bouts of constipation or chronic constipation can have an effect on the frequency of your body’s natural bowel movements, slowing everything down even during a constipation remission.

Many remedies for constipation also apply to helping with irregular bowel movements. These methods include:

If prolonged irregular bowel movements persist, you may want to see a doctor to make sure it isn’t a symptom of another more serious condition.

The final side effect?

The final side effect of constipation? There are more than 3 million new cases of this condition in the United States each year…

The bowels are held in place by a layer of tissue called the omentum. Excess strain or pressure on the bowels or abdomen (as is the case with constipation) can cause the omentum to tear. This initial tearing, in turn, causes portions of the intestinal tract to protrude from the tears. The result? Hernias.

What are the symptoms of hernias?

Symptoms of hernias include:

Hernias may require surgery. Typically, hernias are treated with either open surgery or laparoscopy. Which surgery is performed usually depends on the location and severity of the hernia.

For children with hernias, sometimes the doctor will simply work the tissue back into place using their finger, and see if the tear heals naturally before resorting to surgical repair.

What’s most important to remember for those battling constipation?…

When dealing with constipation (or really, any health condition), it is important to listen to the signs your body is giving you. In other words, do not ignore symptoms when they appear.

What symptoms are cause for concern?

Most cases of constipation are benign. There are cases, though, when this condition can lead to severe complications. Other times, constipation itself can be a symptom of another underlying medical problem.

So, just what signs signal that something is wrong?

What are potential treatments for constipation?

Since everyone’s body works differently, finding the best way to prevent and alleviate constipation will be different for everyone.

In most cases, constipation can be cured through simple lifestyle and diet changes. Increasing the amount of physical activity you get throughout the day, making sure you stay hydrated, and maintaining a healthy diet with enough fiber all go a long way in preventing constipation.

If you suffer from chronic constipation, it may be a sign there is an underlying problem. If you suspect this could be the case, speak to your doctor. However, don’t just wait until there’s an emergency to see your healthcare provider. Regular doctor check-ups are important as your doctor may be able to catch more serious health problems before the symptoms become detrimental to your day-to-day life.