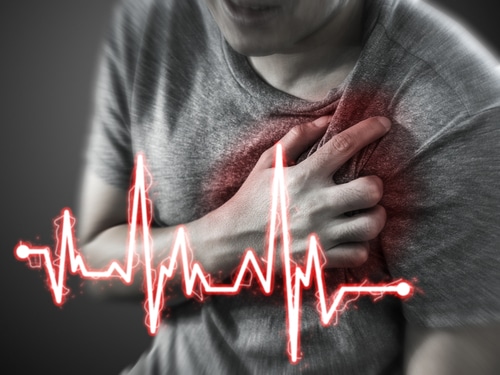 Unsurprisingly, heart attacks happen when blood flow to the heart is blocked by plaque buildup in the coronary arteries. In some instances, heart attacks can be caused by blood clots and coronary artery spasms, or the tightening of the muscles with the arteries. Heart attacks are the number #1 cause of death globally and claim about 17.9 million lives yearly, with one happening every 40 seconds.

Those who have had heart attacks often report experiencing a painful sensation in the upper body, specifically the arms, shoulders, neck, back, jaw, or stomach. While these pains might seem normal, they should not be ignored, especially if they are paired with other signs of a heart attack, such as the following…

Chest pain is perhaps the most obvious warning sign of a heart attack. Chest pains are felt in the center of the chest and are described as being a squeezing sensation or a heavy and dull pressure. These usually come and go, lasting about a few minutes at a time.

The following symptom is an early indicator of heart attacks…

3. Breaking Out in Cold Sweat

Sweating more than usual-even during inactivity or in cool temperatures-is considered an early warning sign of heart attacks. This happens as a result of arteries clogged with plaque, meaning it takes more effort to pump blood. So, the body perspires more to cool down as it exerts this extra effort.

Our next symptom is related to these chest pains…

Like chest pains, breathing problems are also a common symptom of heart attacks. Difficulty in breathing happens when the heart is unable to pump blood properly and is one of the most common signs of a heart attack in women. As such, the body not only exerts extra effort and circulates less oxygen.

Men tend to experience our next symptom more than women do…

The plaque that builds up in the arteries is usually made up of fat and cholesterol. It makes regular blood flow especially difficult and puts pressure on the heart. This pressure effectively weakens the heart and can cause irregular heartbeats, which in turn could lead to heart attacks.

Poor blood circulation can cause dizziness, and given the state of clogged arteries, it’s no surprise that lightheadedness is one of the most common warning signs of a heart attack. In some cases, people pass out while they’re experiencing a heart attack, due to dizziness.

Dizziness can also make your stomach churn in the process, as the next symptom explains…

As a result of dizziness caused by poor blood circulation, it’s fairly common to feel nauseous during heart attacks. According to one study, its occurrence during heart attacks can be attributed to the stimulation of the autonomic nerve peripheral receptors.

Though not always the case, nausea often results in the following symptom…

Vomiting is almost always a side effect of being nauseous. In cases of a heart attack, however, vomiting can occur due to the metabolites stimulating the infarcted areas’ peripheral receptors. Vomiting can also happen during a heart attack.

The next symptom often precedes heart attacks, but sometimes people mistake it for the real thing…

Typically experienced by older people, heart attacks and heartburn pain may feel similar, but they are quite different. For example, heartburn often worsens after eating, causes belches, and does not trigger breathlessness. Regardless, it’s still something to watch out for.

Heart attacks can take their toll on the body, as our next symptom shows…

The experience of having a heart attack can feel truly exhausting. After suffering a heart attack, people tend to experience fatigue, which occurs due to the heart being stressed as it tries to facilitate blood flow through already-clogged arteries.

But did you know that it’s not only the body that suffers from heart attacks?

Studies have shown that suffering a heart attack could trigger mental health disorders, such as PTSD and anxiety, due to sufferers being overwhelmed by the ordeal. As such, they might need psychiatric support and even medication for depression.

If you or someone you love experiences a heart attack, it’s important to think fast and call emergency services.