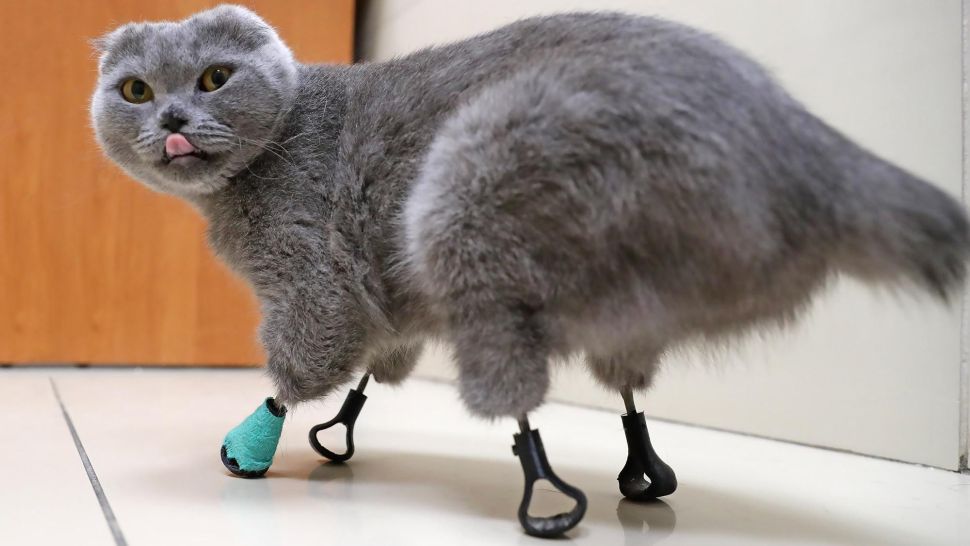 Scientists just might be the source of some of the coolest photos every year. They capture things in ways that we would never have given a thought. From tiny mice fight sightings to the discovery of ancient roaches, check out this crazy collection of science photos.

Platypuses are a unique animal, as their venomous nature and duck-billed features make them stand out amongst the rest. In 2020, this mammal got weirder, as their fur was discovered to glow green and blue under ultraviolet light, which is called biofluorescence. This trait is typical in fish, amphibians, birds, and reptiles, but extremely rare in mammals.

Deep in the depths of the ocean, scientists discovered the remains of two ancient fish named Monosmilus chureloids, based off their fanged teeth on their lower jaws. This name translates to “single knife Churel”, which is a reference to a shapeshifting vampire-like demon with large fangs found in the folklore of several South Asian countries,

On one sunny day in South Africa, beachgoers discovered a giant squid washed up that had been washed up to shore. This squid, called an architeuthids dux, measured more than 4 meters long and weight more than 660 lbs. Surprisingly, the squid was found in-tact among the seashells near Cape Town.

An Abundance of Tails

It’s a well-known fact that lizards can re-grow their tail once it has lost their first one. But what some may not know, though, is that an injured lizard can grow back two, three, or even six tails. In a study done over poly-tailed lizards, it was found that more than 175 species in 63 countries portray evidence of multi-tailed lizard sightings. Based on the research, a team estimated that as many as 3% of all lizards may be multi-tailed.

This next photo was taken by Dhritiman Mukherjee, an India-based photographer. This crocodile served as the ultimate method of transporation for 100 of its month-old children, making for an efficient way to get around town.

One day, photographer Mark Fitzpatrick went for a swim at Lady Elliot Island on the Great Barrier Reef. To his surprise, the turtle he was swimming with flipped him the bird. This amusing animal photo placed as a finalist at the Comedy Wildlife Photography Awards, a competition designed to raise awareness of the need for conservation.

A Cute New Addition A Zoo

One of the cutest additions to 2020 was a newborn male pygmy hippo, born at the San Diego Zoo. This adorable hippo pup was up and following its mother around within hours after birth.

In southern Argentina, a cloud in the shape of a saucer was seen hovering over the peaks of El Chaltén. This type of cloud is classified as a standing lenticular cloud, often seen in mountainous regions.

A Bird With the Best of Both Worlds

At the Carnegie Museum of Natural History’s Powdermill Nature Reserve in Pennsylvania, a unique discovery was made in the year 2020. A rose-breasted grosbeak bird was unveiled to be male on the right side and female on the left. Typically, plumage colors in this type of bird determine the gender, but in this rare case, the bird has both sexes’ colors.

Another rare discovery that was made in 2020 was of this two-headed racer snake discovered by a house cat in Palm Harbor, Florida. This condition is often found in deer and porpoises, but it’s quite rare in snakes. When identical twins fail to fully separate, this condition is known as bicephaly.

On a hillside in southern Peru, archaeologists discovered a Nazca Lines formed into a portrait of a cat. Nazca Lines are a group of enormous human-made outlines, typically of animals and plants.

In an Italian museum, a student studying archaeology discovered one of the oldest swords on record. This sword dates back about 5,000 years to eastern Turkey, where swords are thought to have been invented.

When French photographer Greg Lecoeur dove deep in the waters of Antarctica, he stumbled across an awe-inspiring group of crabeater seals gathered together under an iceberg.

In 2018, a female cat in Siberia was found with four frostbitten paws, ears, and a tail. Sadly, the frostbite was so bad that veterinarians had to amputate those limbs. But, that didn’t stop this kitty from living her best life. After the amputation, researchers designed titanium paws specifically for the cat.

Kicking off our list of 2020’s top science photos is this subway brawl between two mice over a scrap of food. Taken by U.K.-based photographer Sam Rowley, this photo won the people’s choice award for the London Natural History Museum’s Wildlife Photographer of the Year competition, rightfully so.

A silkhenge in the Amazon was discovered being crafted by spiders. In a video captured in Peru, tiny spiders were seen breaking out of the web towers, suggesting they serve as protective fences around spider egg sacs.

A Family of Furry Friends

In Belgium’s privately owned zoo and botanical garden called Pairi Daiza, a family of orangutans and river otters were seen interacting in an adorable way. The zookeepers purposefully let them interact, and it went way better than planned.

19. The Ultimate Display of Constipation

In this photo, a lizard is seen stuck with a large sum of unpassable feces trying to move through its body. The mass made up a whopping 80% of the lizard’s body weight, due to its greasy and sandy diet.

More than 300 tombs were recently discovered in Aswa, Egypt. Amongst these tombs in the city of the dead, archaeologists discovered and created a digital reconstruction of a colorful leopard’s face from a sarcophagus.

Underneath the canyons of the South Australian coast, a underwater ecosystem features a garden of both flourishing and dead corals. In 2020, researchers were able to discover how the area has been affected by climate change over time.

Last year, researches discovered evidence that nobles in imperial China played donkey polo in the tomb of an important woman, Cui Shi, more than 2,000 years ago. Shi was buried with donkeys for the sole purpose of being able to play donkey polo in her after life.

In Germany, a dagger was discovered by a teenager in a 2,000-year-old grave of a Roman soldier. This dagger took nine months to restore with the power of sandblasting and grinding techniques.

24. Alien Spacecraft or A Clump of Rocks?

In October of 2017, an interstellar object named Oumuamua appeared in our solar system. Since then, scientists have been studying the strange object and have arrived at compelling origin story for it. The study claimed that fragments of the rock were bound together after being too close to their home star.

25. An Early Inhabitant of Syphilis

A 9,900-year-old skull of a woman was discovered by cave divers in the Yucatán Peninsula. The skull signaled that the woman had three injuries on her head, all made with a hard object. It didn’t stop there, though, as pits and crater-like deformations on her skull signaled signs of syphilis.

The Milky Way’s missing stars has always been a mystery to scientists around the world. Recently, NASA captured a beautiful image of the heart of our galaxy that revealed new information to explain the odd star formation.

1.5 billion years ago, a massive rotating disk galaxy nicknamed “Wolfe Disk” appeared after the Big Bang. In 2020, scientists were able to discover new information about galaxy formation from this disk. The Wolfe Disk suggests that disk galaxies can actually form quite quickly, as tradition galaxy formations take quite a bite of time.

Due to its aligned pillars and circle, scientists were able to discover the world’s oldest known temple on a precise geometric plan. This Neolithic site is known as Göbekli Tepe and was said to be built 11,000 to 12,000 years ago. The temple lies in a limestone mountain ridge in southeastern Turkey, where it appeared 6,000 years before Stonehenge.

The oldest hibernating animal on record was discovered according to a study. Some 250 million years ago, a two-tusked beast with clawed digits survived Antarctica’s grueling winters by hibernating.

On October 30th of last year, an old and lost colorful chameleon was rediscovered after disappearing in 1913. The Voeltzkow’s chameleon was found to be male a long time ago, but no one has seen a female of this species until now.

An Ancient Pair of Roaches

For most of us, cockroaches are an insect that we avoid. But, when archaeologists discovered a pair of cockroaches trapped in amber, they were actually pretty excited and for a good reason, too. This pair of insects are a whopping 99 million years old, making them the world’s oldest roaches discovered to date.